Excerpt from the novel 'The Girl in the Dream' 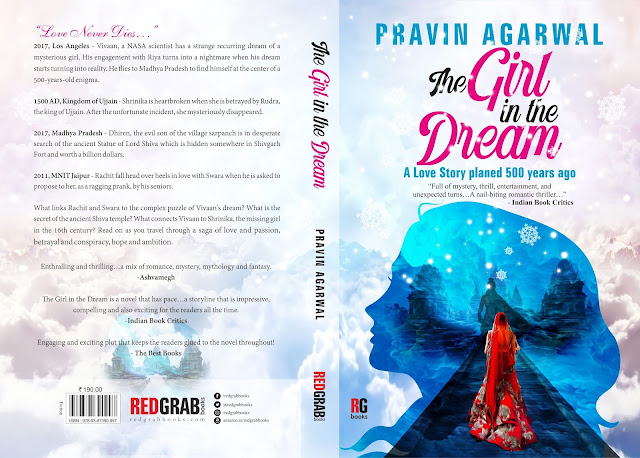 The novel, 'The Girl in the Dream: A Love Story Planed 500 years ago' continues to be on Amazon bestseller list. Tap the below link to buy.

Synopsis: The Girl in the Dream

2017, Los Angeles - Vivaan, a NASA scientist has a strange recurring dream of a mysterious girl. His engagement with Riya turns into a nightmare when his dream starts turning into reality. He flies to Madhya Pradesh to find himself at the center of a 500-years-old enigma.

1500 AD, Kingdom of Ujjain - Shrinika is heartbroken when she is betrayed by Rudra, the king of Ujjain. After the unfortunate incident, she mysteriously disappeared.

2017, Madhya Pradesh - Dhiren, the evil son of the village sarpanch is in desperate search of the ancient Statue of Lord Shiva which is hidden somewhere in Shivgarh Fort and worth a billion dollars.


2011, MNIT Jaipur - Rachit fall head over heels in love with Swara when he is asked to propose to her, as a ragging prank, by his seniors.

What links Rachit and Swara to the complex puzzle of Vivaan’s dream? What is the secret of the ancient Shiva temple? What connects Vivaan to Shrinika, the missing girl in the 16th century? Read on as you travel through a saga of love and passion, betrayal and conspiracy, hope and ambition.
"Enthralling and thrilling, a mix of romance, mystery, mythology and fantasy...The story has the visual effect of a screenplay...a magnum opus!"
Ashvamegh
"The novel is for all the readers who love reading modern Indian fiction that has meaning and enthusiasm, element and energy, style and class, modernism and traditional appeal."
Regular Books & Reviews
"Full of mystery, thrill, entertainment, and unexpected turns...A nail-biting romantic thriller..."
Indian Book Critics
"Pravin has achieved quite big in terms of fiction's height in this novel. Reading the novel will be a very happening journey for the readers."
Book Reviews Web
"An engaging and exciting plot that keeps the readers glued to the novel throughout! It's a moving novel and the readers will never feel underwhelmed."
The Best Books
"It began with a surprise and continued to pack and offer me the surprises all the way. It will be interesting as well as exciting read for the readers."
Silent Book Reader
"The Girl in the Dream is a novel that has pace, interesting threads that connect the past and the present and a storyline that is impressive, compelling and also exciting for the readers all the time."
indianbookcritics.in
"Pravin Agarwal, the novelist who penned this beautiful story of lovers at present and lovers in the past, has done his extreme best."
regularbookreviews.art.blog 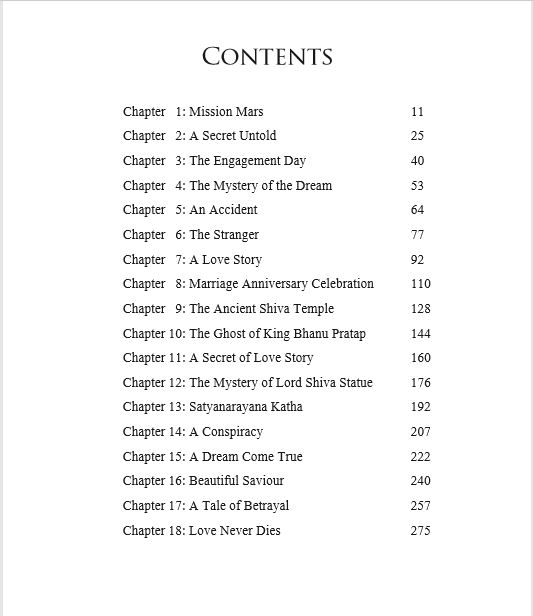 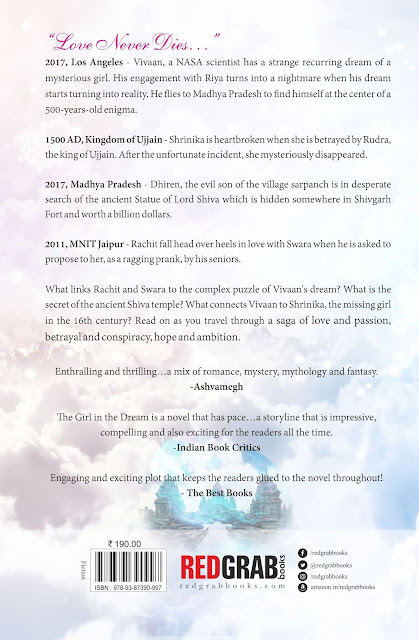 Pravin Agarwal The Girl in the Dream

Popular posts from this blog

Excerpt from the novel 'The Raavan Key (Drumatulya Trilogy 1)' 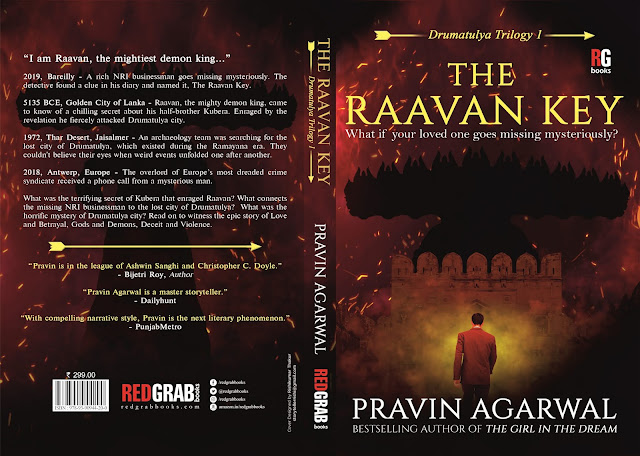 Excerpt from the novel 'The Raavan Key (Drumatulya Trilogy 1)' INTRODUCTION 27 th  January 2019, Bareilly Kartik, a rich NRI businessman, arrived in Bareilly, India from the USA along with his wife and children. He had come to attend the wedding of his niece Indu, the daughter of his cousin, Harish bhaisaab. Everything went fine for the first two days. On the day of the wedding, he went to visit the Pashupati Nath temple in the morning but didn’t return. He went missing mysteriously. Harish bhaisaab hired detective Ajay – the best detective in Bareilly – to solve the case, as Inspector Rana suspected the involvement of the most dreaded crime syndicate of Europe in the disappearance. Upon investigation, Ajay found Kartik’s diary. He knew that it was an important clue, as Kartik was writing in it for a month just before he went missing under strange circumstances. As expected, Ajay found valuable information in the diary. His sixth sense told him that the information could prove
Read more

How to market your book?

- March 20, 2021
The most commonly asked question by the Authors is how to promote their book. Below are the few pointers, which I found effective. 1. Increase the visibility of your book and of yourself as an Author(both online & offline). Online is economical. The more the readers know you, the better are the chances that they pick your book.  2. Take the help of Amazon and Instagram paid marketing to reach a wider audience. 3. Get more reviews of your book on Amazon, Instagram and other relevant platforms. 4. Content marketing - Share about your book on social media. 5. Maintain discipline and write daily. The more you write the more you become known and established as an Author.  If you know any other helpful point, then do add it in the comment section so that aspiring authors get benefited from it.
Read more

My journey as an Author - Pravin Agarwal 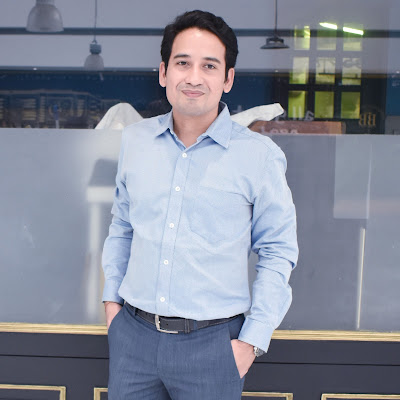 My first novel was ‘8 Course Meal for the Soul’. I wrote it in three months and self-published it immediately in the year 2017. It was a motivational novel. I was not satisfied with the end-product and thus withdrew it from the market within one month. My actual journey as an author began after that. I then read so many talented Indian authors and learned from them. Simultaneously, I began writing my second novel ‘The Girl in the Dream’. It took me almost one and half years to write it.   Next, one year went into finalizing a suitable traditional publisher, editing by a professional editor, proofreading, finalizing marketing plan, etc. Finally, in March 2020 the novel got published. Since I withdrew my first novel from the market soon after its release, I consider ‘The Girl in the Dream’ as my debut novel. It took me four years of dedicated efforts, patience and focus to make a mark. I am highly grateful to all the readers for their overwhelming response. A big thank you to all for
Read more